Five tips to improve your active listening in online conversations 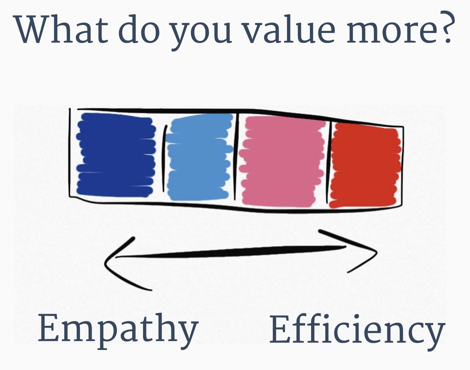 Where might you place yourself on this spectrum? To showcase our five tips to improve your active listening in online conversations, let's consider an example in which a leader didn't listen very well.

“A member of our team approached me for feedback on a solution he had designed. He sent me an email outlining his approach. On that day, like most days, I was busy. I skimmed his email and quickly jotted down some notes. My goal was to respond quickly so that I could move on to other things.

I had also solved a similar problem before. So, I sent a brief, constructive response in which I highlighted my previous similar experience followed by a few bullet points on what I'd change. He made the changes I suggested, and we never talked about it again. At the time, I saw no problem with how I handled that.”

This response would not have made this team member feel good or heard. Here is how the team leader later reflected on it.

"Upon reflection, I doubt my response made him feel good. I did nothing to convey confidence in him, build his self-esteem, or make him feel supported. And, while I can’t be sure if my response hurt our relationship, I am confident that it didn’t help our relationship. The lesson I was teaching him was: If you want to get something right, ask me and I’ll tell you what to do.”

Here are five tips to improve active listening, and how they could have been used in this example.

Make sure you set aside time and space to completely focus on what the other person has written. This leader was more focused on responding quickly. In conversation terms, this is the equivalent of selective or even passive listening, as opposed to active listening.

This leader could have resisted the temptation to respond immediately. Considering this was an email conversation, waiting until the next morning would have been fine. The same is true for a conversation in Joyous.

Asking specific questions indicates that not only are you listening, you are also comprehending it well enough to want to know more.

Instead of replying to the email, it would have been even better if this leader continued the conversation in person. Regardless of whether the conversation continued online or in person, this leader could have first invited the team member to flesh out and clarify his thinking. It's possible he had already thought about what the team leader suggested and had good reasons for not doing it that way.

This leader could have offered validation in a number of ways. They could have recognised the effort the team member put in, and agreed with his approach and thinking. If it turns out they didn't agree, validating the topic as a challenging one may have been enough.

5. Be aware of the shift response

When this leader referenced their previous similar experience, they turned the attention away from the team member and onto themselves.

Listening doesn’t just help you form a bond, it helps you become more influential within your organisation. Studies show that leaders who are good at listening, are more likely to be promoted.